Here's a selection of articles that were published in magazines and newspapers. To be continued... 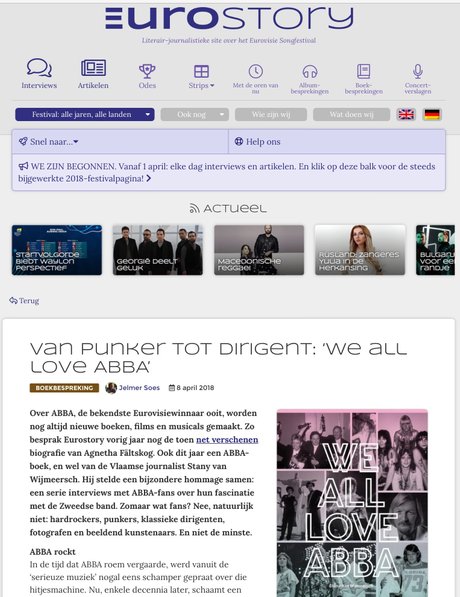 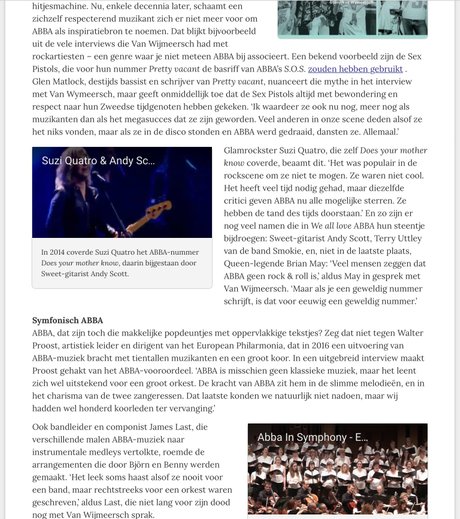 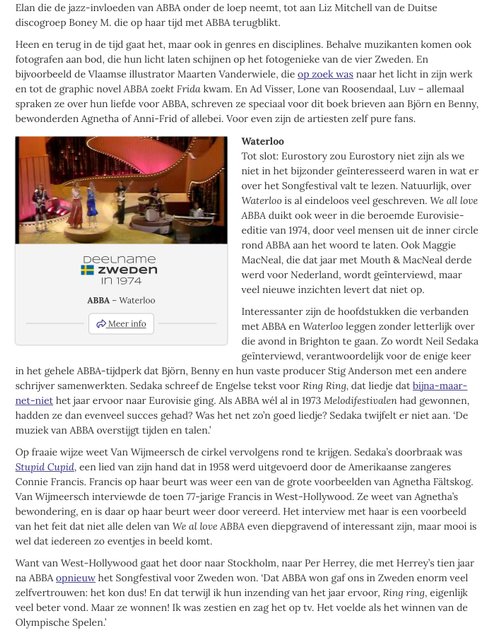 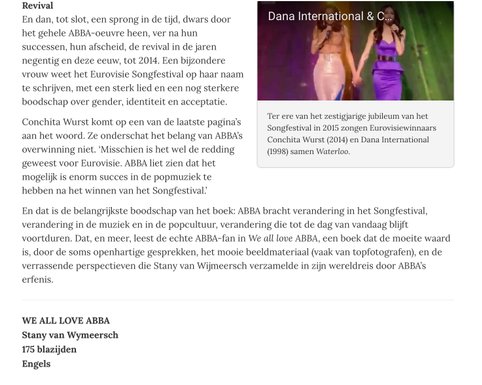 Review by Jelmer Soes for eurostory.nl

A very positive and exhaustive review of 'We All Love ABBA' was published on the highly interesting Eurovision website eurostory.nl . Several relevant YouTube links accompany the review. 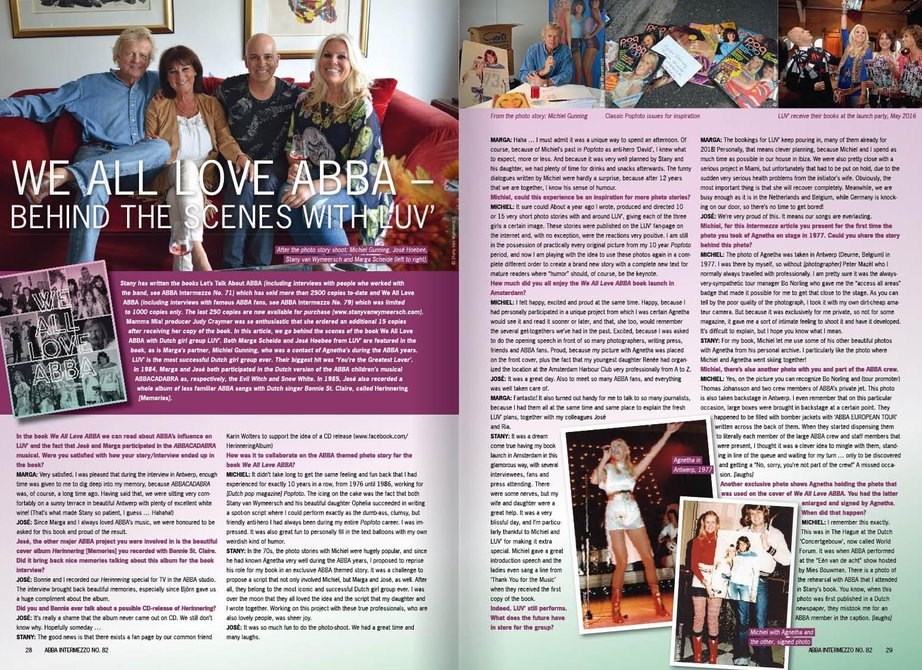 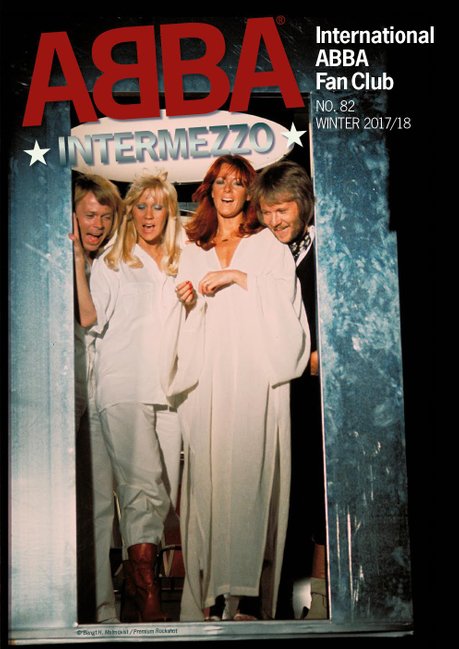 To order a copy of this magazine visit www.abba-intermezzo.de

Review and article about my meeting with ABBA saxophone player Ulf Andersson, whom I interviewed for 'Let's talk about ABBA'. Written by Dominique Dierick 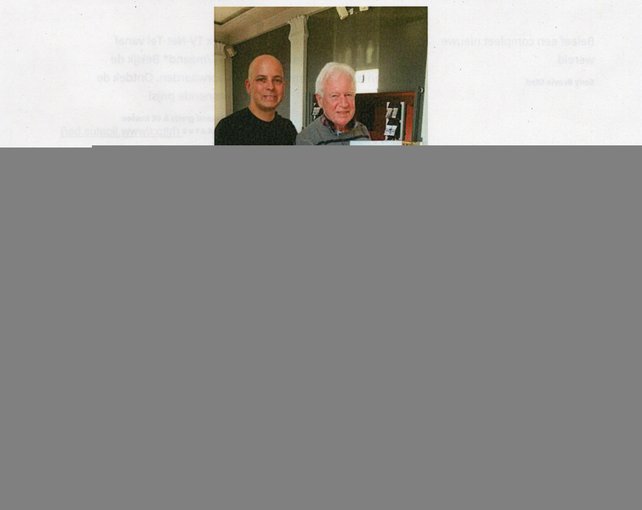 Very pleased with this great interview by Regina Grafunder 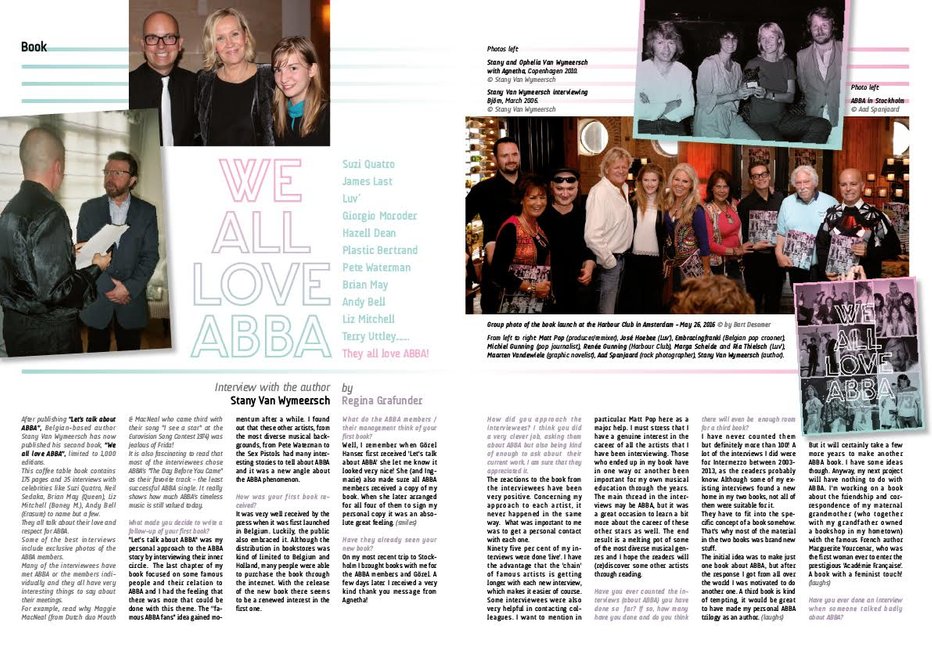 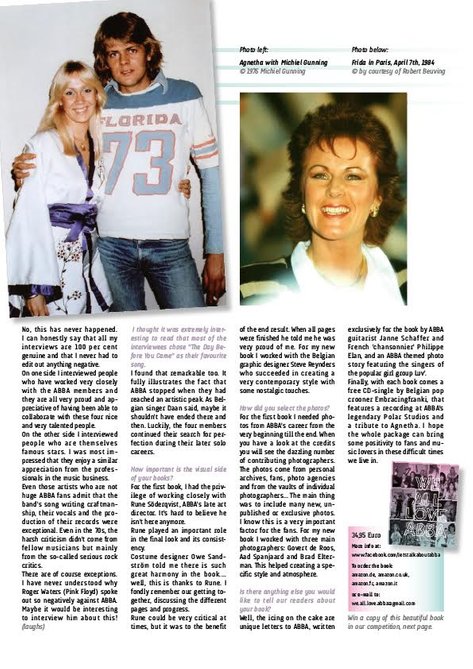 To order a copy of this magazine visit www.abba-intermezzo.de 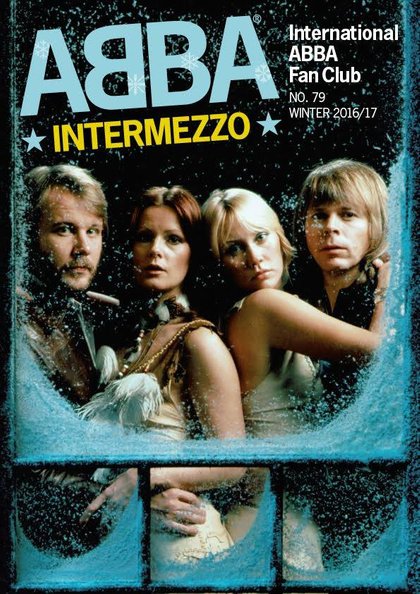 The biggest Dutch newspaper reserved a whole page for the sensational showbizz news that Cher joins the cast of the new Mamma Mia! movie. For this article I was briefly interviewed by Jan Uriot. 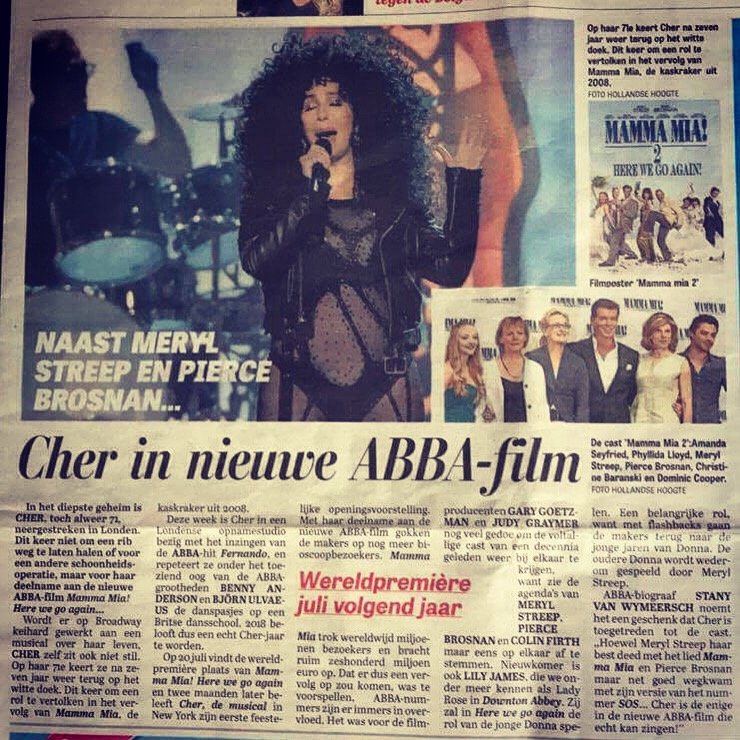 Nice 'We all love ABBA' review by Madelon de Swart with a recommendation for the Dutch public libraries.Two small mistakes though: I did not interview Patty Brard but José Hoebee (LUV') and Andy Scott is a member of Sweet and not Smokie. 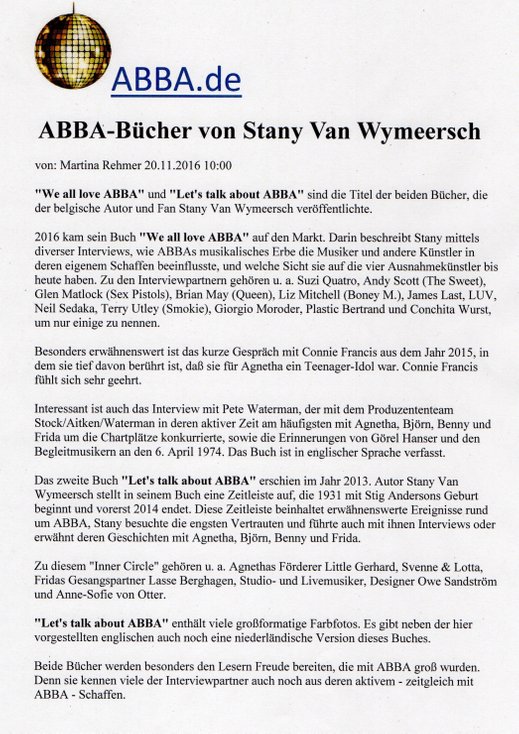 Very nice review in German about my books by Martina Rehmer from abba.de. You can also read the online article here 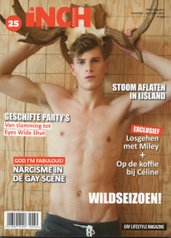 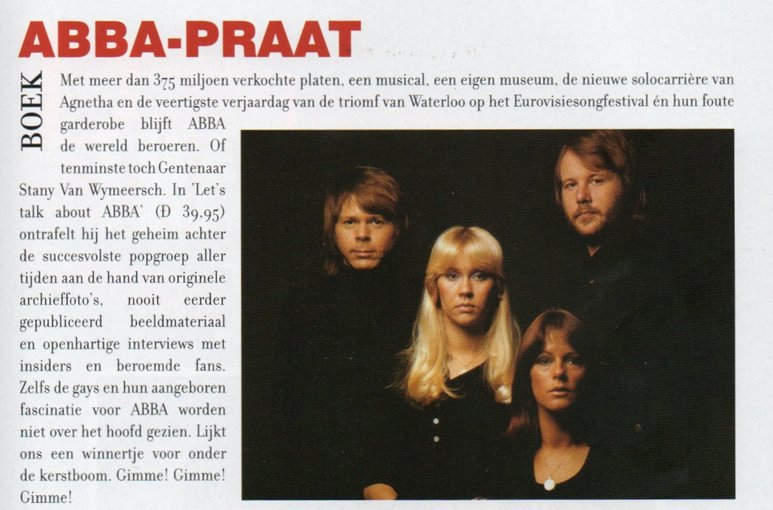 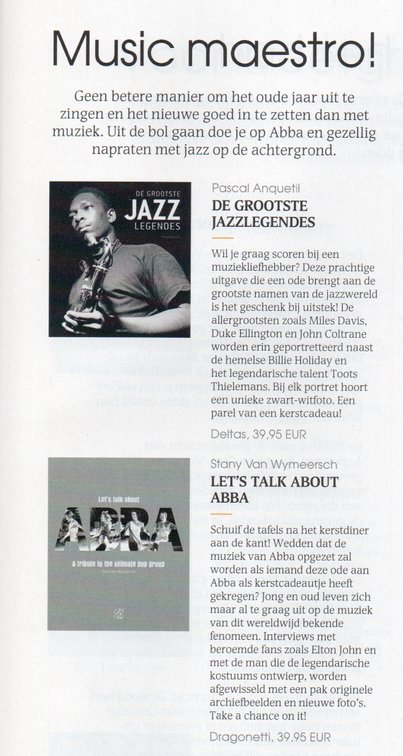 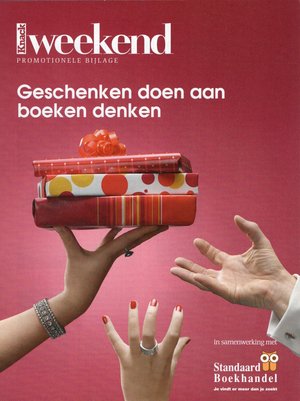 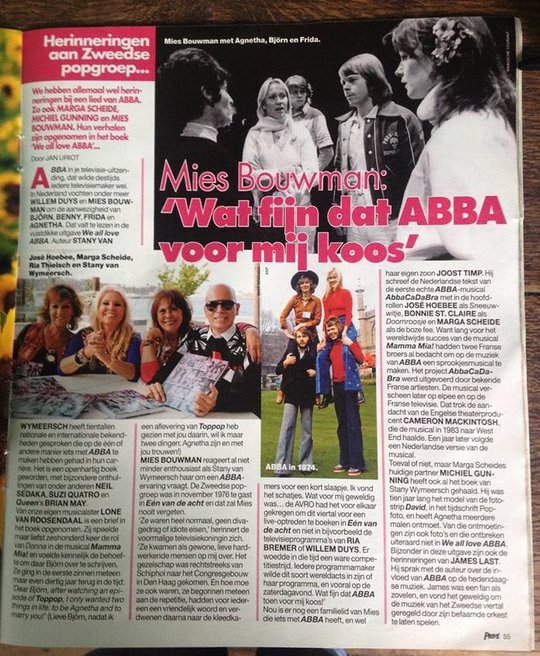 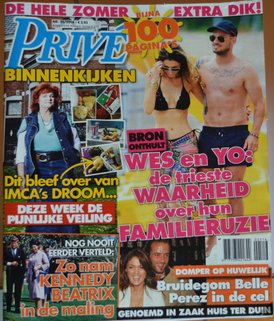 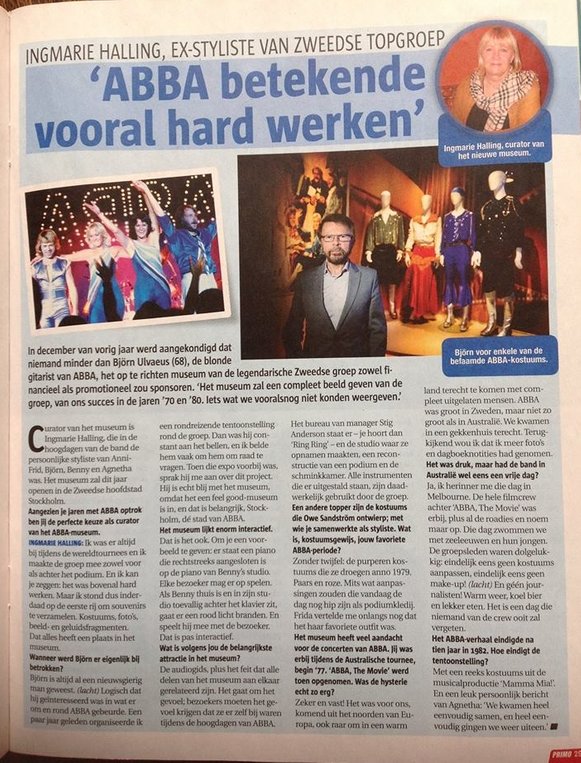 A preview of my interview with Ingmarie Halling, curator of ABBA The Museum was published in PRIMO Magazine (Full article in 'Let's talk about ABBA').

The first article about ‘Let’s talk about ABBA’ was published in Belgian newspaper 'Gazet van Antwerpen' on November 9th, 2013. In his review, journalist Peter Briers called it "an exclusive chronicle, featuring ABBA and their entourage". 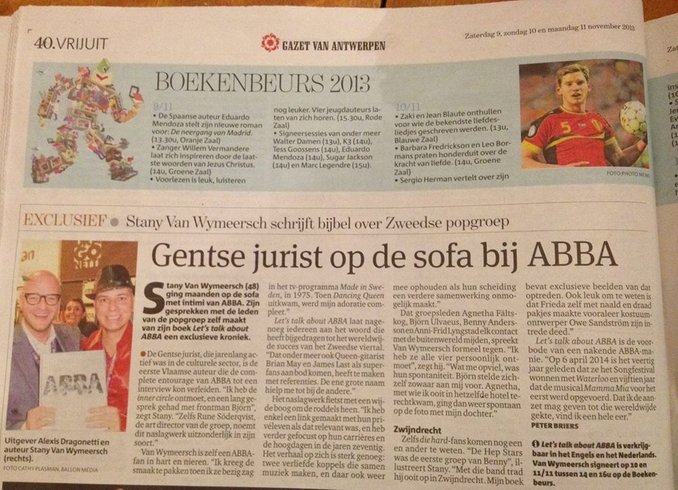 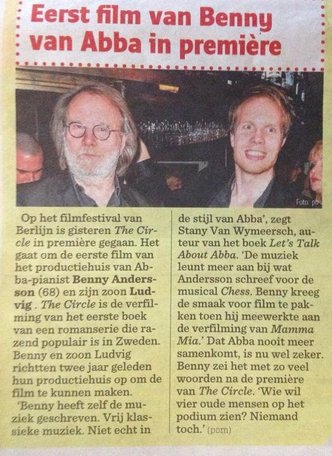 'Let's talk about ABBA' was mentioned in Belgian newspaper 'Het Nieuwsblad', in an article about Benny and Ludvig Andersson's film production 'The Circle'. It includes a short interview with myself

You can read the full article here 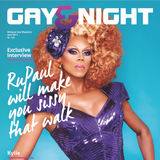 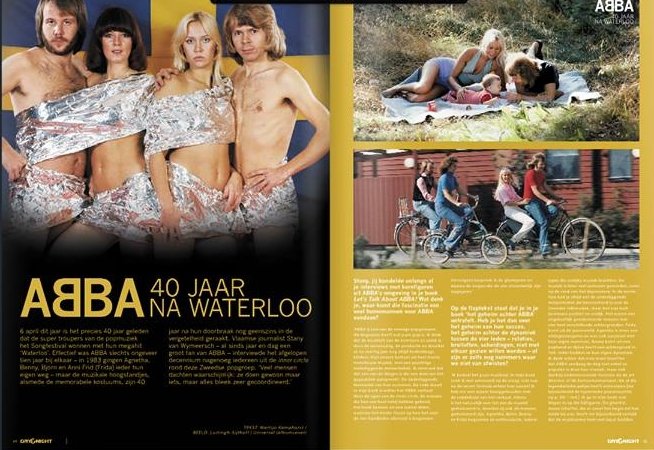 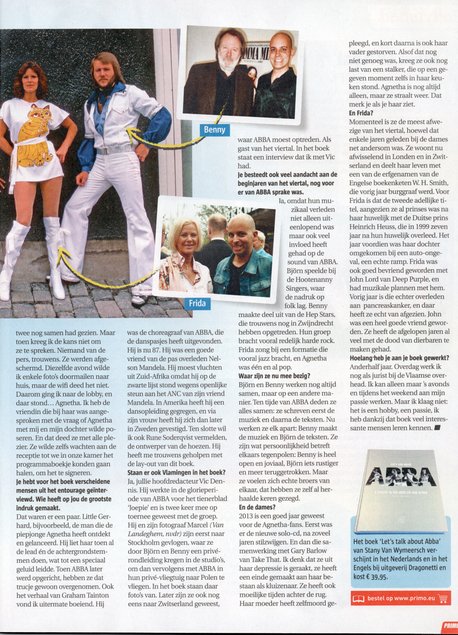 This time around editor-in-chief Vic Dennis interviewed me about my book 'Let's talk about ABBA'. The roles were indeed reversed as Vic was one of the interviewees of my first book. In the '70s he had a very good contact with ABBA and their manager Stikkan Anderson as a pop journalist, accompanying them for example on their legendary Poland trip. 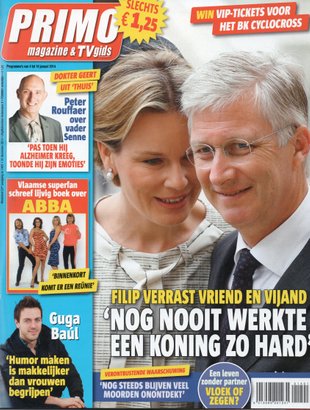 The article was even announced on the cover of the magazine

in this interview with pop crooner Embracingfranki, one of the interviewees of 'We all love ABBA', the Belgian artist talks about his latest projects, including his contribution to my book. 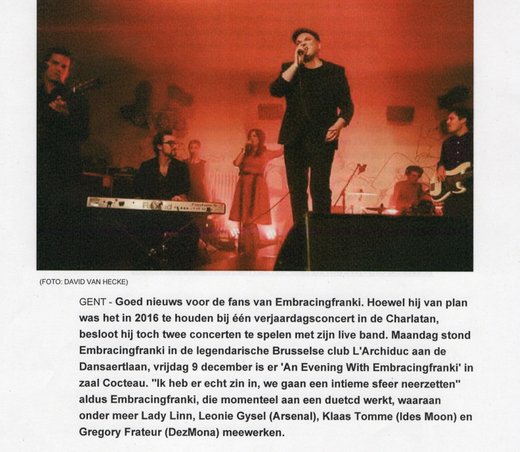 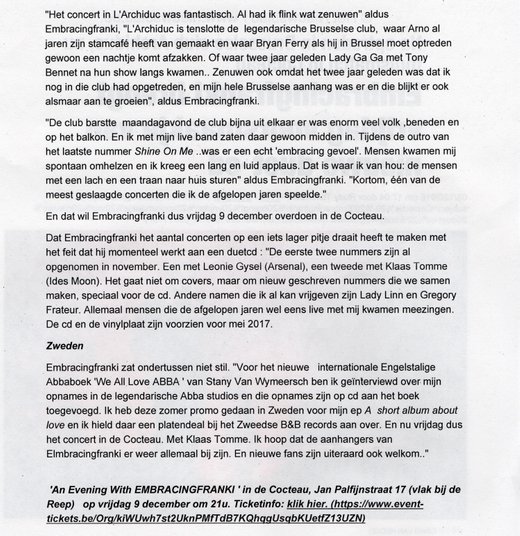 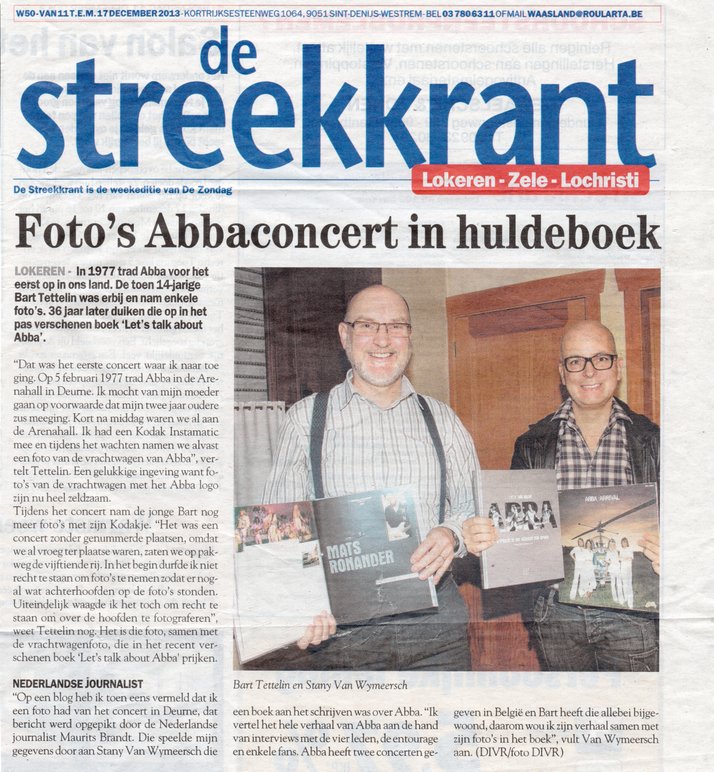